In 1951, Johnny Rolland became the first Executive Director of UCP Greater New Orleans. A play school for children with disabilities up to the age of 6 was started; school was followed by therapy sessions for older children in the afternoon.

An Adult Treatment Program was initiated in 1951, but this program only lasted until 1956.

An Adult Sheltered Workshop was started in 1957. At that time, potted plants and seedlings were raised and cultivated for resale. The following year,  production of woven baskets, planters and tote bags was also begun. In 1960, the workshop abandoned the horticulture phase, but continued production of baskets, etc. Later that year, this project was substituted for the production of ceramic tile items.

In 1964, the Farhad Grotto installed a dental unit and dental services were added to the program under the direction of Dr. Ralph Diaz. Upon Dr. Diaz’s retirement in 1984, Dr. Francis Martello volunteered his services as Director of the dental program and is still the director today.

Dr. Soboloff served as Medical Director from 1968 until 1987. After his death, our treatment center was re-named the Soboloff Center for Children in honor of his 35 years of dedication. Calling it a “Center for Children” was to recognize that all disabilities were eligible for treatment if the needed therapeutic services were available. For many years, UCP Greater New Orleans had opened its admissions policies to all developmental disabilities, but this fact was not widely known.

Glennie Wray became the Executive Director of UCP Greater New Orleans in 1980. During the same year the State our Clinic under the direction of Dr. George Cary, merged with the local New Orleans affiliate to provide medical services to children with developmental disabilities throughout the State of Louisiana.

In 1981, Adult Services started a Work Activity Center and equipment was secured for silk screening T-Shirts and other articles of clothing, manufacture of buttons for organizations, shrink wrapping and printing posters.

Children’s Services moved to Touro Hospital in 1982. The play school at this time consisted of a morning program for babies under 3 years old followed by a nursery school. A multi-disciplinary team approach was evolving in working with the children. School and therapy began to be interwoven. Medical services and therapy were still available to older children and young adults up to the age of 21.

A second Work Activity Center was established in 1983. The main thrust of that program was to train and provide meaningful work in the areas of janitorial services, gardening and wood-working. From time to time, both work activity centers secured various in-center assembly and mailing contracts.

A Sports Program was also established in 1983 under the chairmanship of UCPGNO Board Member, C. J. Bennett. The team, named the UCPGNO Hurricanes, served individuals with physical disabilities age 8 and above by developing each athlete’s physical potential and increasing their self-esteem.

Carol Porter became Executive Director of UCP Greater New Orleans in 1989.  In 1990, our Work Activity Center on the Westbank Center was closed. This was the beginning of an important transition – moving the employees out of the workshop and into the community for training and/or employment. Through the years, UCP Greater New Orleans has become a national leader in the transition from center-based to community-based adult employment.

Consumer Residential Services began in 1992 and the department name was changed to Supported Living Services (SLS) in 1997. SLS provides support to individuals with disabilities who choose to live independently within our community. Services include: personal care attendant, respite care, and supported living components.

In 1994, Paul Bussell became Executive Director. In 1995, Children’s Services began an Early Intervention Play Group for children birth to three years of age with developmental delays. In 1996 the Program made a transition from center-based to community-based early intervention services. Professionals began providing special instructions and therapy in the child’s most natural environment, such as child care centers or the child’s home.

In 1996, a Wheelchair Seating Clinic was started by Dr. James T. Bennett. A team of professionals, including an orthopedic surgeon, physical therapist and rehabilitation specialists began working together to evaluate, measure and fit children for wheelchairs. In 1999 a Neurosurgeon, Dr. John Walsh, was added to the team enabling the Clinic to provide an even wider range of services. In 2000, Dr. Walsh added a Spasticity Clinic to further expand UCP Greater New Orleans’s medical services to children with disabilities. The J. Monroe Laborde Spasticity Clinic was dedicated on February 14, 2000. Dr. Missy Binder joined the group in 2000 with the initiation of a Wellness Clinic for children, youth and young adults with disabilities – birth to 21 years of age. Dr. Diane Africk, Neurologist, joined the team in 2002 adding another needed dimension to our clinic services.

An important transition has taken place in the Adult Services and Supported Living Services during the last 20-30 years. In the past, “experts” decided what was best for the UCP Greater New Orleans adult clients – for example, in employment opportunities, a professional would look at the person’s disability and decide what kind of job he/she was capable of doing. UCP Greater New Orleans began to incorporate a Person Centered Planning approach in 1998.  Our clients are now in the driver’s seat; with professional counseling, they decide what their goals are and what kind of job they desire. The focus is on their ability and needs; not their disability. Other important changes occurred in Adult Services in 2000.  UCP Greater New Orleans made the transition from center-based activities to community-based. Instead of keeping people with disabilities segregated in centers, adult clients are working, volunteering and spending their leisure time as they choose to in their own community.  As a result, UCP Greater New Orleans’ services to adults were reorganized under the title of Independent Living Services.

For more than 60 years, United Cerebral Palsy of Greater New Orleans has fulfilled its mission to the metropolitan area of New Orleans: To advance the independence, productivity, and full citizenship of people with cerebral palsy and a spectrum of other disabilities.

Janet Ware was appointed Acting Executive Director in March 2005 but left the organization in July 2005.

On August 29, 2005, Hurricane Katrina devastated New Orleans and the Gulf Coast Region. During this period, Jo Bugg was appointed Executive Director. The challenges were tremendous but UCP Greater New Orleans reopened its doors on October 13, 2005.  Programs were drastically affected by the unprecedented  scale of the disaster. Our Children’s Program went from 54 participants to 5, Supported Living Services from 78 to 49 and our Mobile Crew from 47 to 7. These were trying and challenging times for UCPGNO but with strong leadership and help from the community, we survived the aftermath of Hurricane Katrina.

In June 2006, we moved our administrative offices to the Metropolitan New Orleans suburb of  Kenner, Louisiana. The downsizing, insurance cuts and money saved because of this move has helped UCP survive during the rebuilding phase of our city and our organization. .

Kendra Nelson was appointed interim Executive Director of the organization in March 2014. 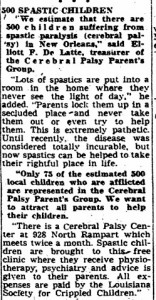 The Cerebral Palsy Parents Group, organized in New Orleans in 1946, was specifically formed to address the needs of children with Cerebral Palsy. This 1949 article solicits new members to the group which already included the parents of 75 children.
— from the Times Picayune, January 14, 1949 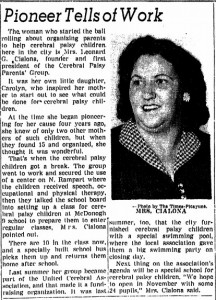